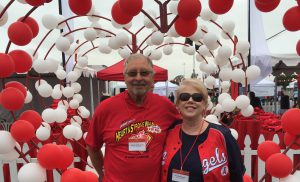 Dennis and Ann Dobkowski will be speaking at next week’s Capitol Hill briefing focused on National Heart Valve Disease Awareness Day. Below is their story.

Dennis Dobkowski’s heart valve problem didn’t seem so bad at first. It had actually begun with the detection of a heart murmur during a routine doctor’s visit 15 years ago. It was not a big deal, just something to keep track of.

But in one brief doctor’s visit in 2014, everything changed for the then 67-year-old Southern Californian.“I started feeling totally exhausted all of the time and couldn’t focus on work. When I went in for a checkup, my doctor told me I had a leaking heart valve,” recalls Dennis.

He and his wife, Ann, a registered nurse, were told he’d need to have heart valve surgery within the next month and a half.

The change was a wake-up call for the couple. “I had no idea. When they said a heart murmur, I didn’t realize it could progress to valve failure,” admits Dennis. “At that point I was going merrily along. But all at once it got more serious.”

“He was always an active man,” adds Ann. “All of the sudden, I could barely get him out of the chair. There was such a difference.”

But they followed their doctor’s advice and got the surgery scheduled.

To prepare for the surgery, Dennis and Ann started to look for information about heart valve disease. They were surprised to find that there wasn’t as much information as you’d expect for a life-threatening disease that affects more than five million Americans.

Fortunately, Dennis crossed paths with someone who had experienced heart valve surgery and who was able to prepare him for what was to come.

Dennis not only successfully came out of his surgery, he also found a new calling: as a heart valve disease ambassador for the American Heart Association (as did Ann).

“After my surgery, I met people from the AHA who said they were starting an Ambassador program for heart valve disease,” he says. “Both Ann and I got involved.”

Today, Dennis is enjoying his post-surgery life and his new passion for educating others about heart valve disease.

When he was given an opportunity to participate in a kick-off event in celebration of the first-ever National Heart Valve Disease Awareness Day on February 22 in Washington, D.C., he could not say no.

“We are so excited to come out and speak on Capitol Hill about our story,” he says. “National Heart Valve Disease Awareness Day offers a forum to encourage people to be aware about the dangers of heart valve disease. People often have symptoms like I had and think it is connected to ‘old age.’  But they can be the warning signs for heart valve disease. We want people to listen to their heart and get it checked out with their doctor. It could be life-saving. In my case it was, and every new day is a gift for me.”